Here are my predictions for the 2016 Olympia.

First of all, I believe that Phil Heath will make it 6 in a row, equaling the record of the great Dorian Yates.

In the 212 Showdown, Flex Lewis should extend his winning streak to five, with Hidetada, David Henry, Eduardo and Jose Raymond close behind. The big question is…when will Flex Lewis step up and test himself against the open class Olympia guys? Hidetada competed with success against the big boys, and Flex Lewis is a superior physique to Hidetada in my opinion. Let’s hope that Flex will step up next year and take his physique and personal goals to the next level.

I predict that Classic Physique will be a huge hit with the fans and those who love the aesthetics of old style bodybuilding. The weight limits need to be raised a little. Further I would like to see some major forward thinking in how Men’s Physique can be merged with Classic Physique. I see Men’s Physique as a great vehicle to get many guys into competition, but I have never been totally happy that legs are not part of the physique being judged. “Abs and thighs” is such a fantastic comparison pose it should be a part of men’s physique judging, but this is not possible under the present rules.

Roelly Winklaar and William Bonac will continue their personal battle from last year where William came out on top in the Nordic Pro last October. I see Bonac slightly in front of Roelly, this time in an Olympia. 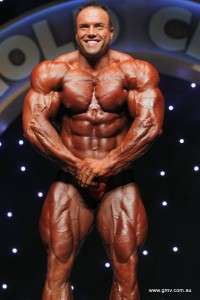 The new guy from Australia, Josh Lenartowicz could easily make the top 6 if he holds his present amazing condition. I have him at 7th, but if any of the 4 guys I have above him are a fraction off, do not be surprised at our Josh placing top-6 in his first Mr. Olympia.

The last resident Australians to compete in the Mr Olympia were Lee Priest and Jonathan Davie, back in 2003. Michael Kefalianos has also competed in the Olympias and been listed as competing for Australia. The last time was in 2012.

Lee Priest made 6th place on 3 occasions. If Josh can make 5th he will be our highest placed Aussie ever in the Mr Olympia.

Roger Walker – born in UK and representing Australia, also made 6th place in the 1980 Mr. Olympia. You have to rate this extremely high seeing he was up against Arnold and previous Mr. Olympia winner Frank Zane.   There is one more who holds the joint record of 6th place with Roger Walker and Lee Priest. That is SONNY SCHMIDT in 1991. 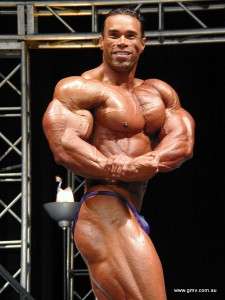 A final word on Kevin Levrone. Nobody will pose better than Kevin, and that is a plus for him. He will probably come in either big and not quite hard enough, or well defined but lacking a degree of muscle density, especially in the legs. It will be extremely hard at his age of over 50 to be big and ripped with perfect symmetry.

I always admired Kevin as a truly great physique champion and I wish him well and hope he performs and places in manner that retains his respect and dignity. Whatever happens his fans will be pleased to see him back on stage again. I would love to see a Masters Olympia Class for Over 50, held at the Olympia each year. Over 40 is these days almost too young for Masters competition.

Cody Montgomery or Ben Pakulski could also easily make the lower end of my top 15.