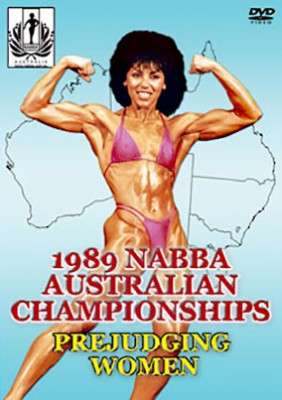 A classic Australian Nationals contest staged at the Dallas Brooks Hall in Melbourne on 17th September, 1989, and featuring Australia’s best  female bodybuilding stars. This DVD brings you all of the highlights from the WOMEN’S PREJUDGING and includes all the important routines and key comparisons. It features Irene Nickole, Vicky Zarmarian and Jackie McKnight. Those who saw Vicky Zarmarian’s raunchy routine wouldn’t forget it in a hurry! It was outstanding.

The event attracted around 80 top competitors, men and women, and was shot with 2 cameras.  The contest was a qualifier for the London NABBA Universe and World Championships in Spain. South Australia cleaned up winning 3 of the 4 Women’s Classes. Irene Nickole is pictured front cover above.
*There were many more women in the contest than the names listed in the RESULTS below. We were unable to obtain the usual set of complete names and results from this contest, as we did the editing and post production only, but not the camerawork.