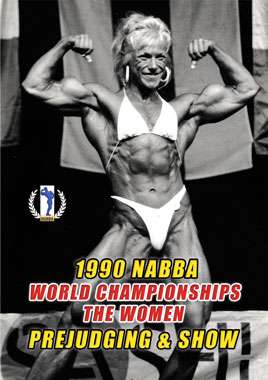 Bernie Price won the Physique Tall Class, and Tania Panza, with a simply awesome physique, took out the Short Class and won the Overall. She was considered Ms Olympia material by any standards.  In Women’s Professional Physique, Germany’s Sabine Wick dominated her opposition.

This contest was held in Geelong, Victoria, Australia. We saw French star Sylvie Esmenjaud for the first time at a World Championships – and she’s still going strong in 2006!! That was just the beginning!

This DVD brings you all the highlights from the Prejudging for all classes, plus all posing routines through to the posedown and final awards at the show. It is one of the greatest NABBA women’s contest DVDs we have ever offered.

The Short Class Figure was won by the petite and lovely Claudia Mayrhofer of Austria, while the Figure Tall Class was convincingly won by Aussie Bronwyn O’Brien over Sylvie Esmenjaud – 2nd, and Stephanie Wehr of Germany in 3rd place.

Bernie Price of the UK won the Women’s Physique Tall Class, and Tania Panza from Italy, with a simply awesome physique, took out the Short Class and won the Overall Physique title.  She would be considered Ms Olympia material by any standards. She was simply sensational.

In the Women’s Professional Physique Class, Germany’s Sabine Wick completely dominated her opposition and with biceps and overall muscularity and condition that had to be seen to be believed, she was simply too strong. You can see Sabine in her own training DVD (see sidebar). Pictured front cover above.