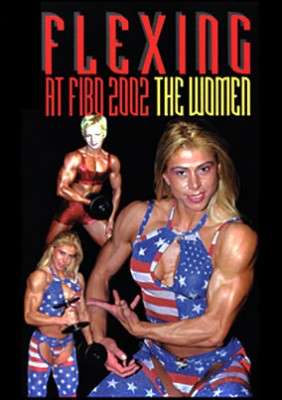 This annual event was held at the huge Essen Exhibition Centre in Essen, Germany, from April 18-21st. It is the world’s largest bodybuilding and fitness Expo. There are 8 main halls and each hall is packed with various shows and products to please every possible taste in bodybuilding and fitness. This Expo is not just another fitness trade show – it is a life experience. There were so many stars in 2002 that we made separate MEN’S and WOMEN’S DVDs.

What is FIBO?   It’s the world’s largest bodybuilding and fitness expo, now dubbed as “FIBOlympia in Essen, Germany.”  There was a real touch of the Olympic spirit with German Winter Olympics Ice Queen Anni Friesinger adding a touch of gold to the FIBO 2002 scene.  She exchanged her golden skates for training shoes to talk about her fitness regime.

This year’s event from April 18 to 21 was held in 11 separate halls and attracted a crowd of 70,000. I would rate the Sunday’s crowd the largest I have ever seen at FIBO.   It  made quite a challenge to move and relocate our 2 video teams from hall to hall without missing any of the action.  Of the 450 exhibitors, the ones promoting hard core weight training and bodybuilding were the most popular with European Women’s fitness athletes from Germany and Slovakia in particular enjoying a very high profile.  More on this later as I believe we recorded some new young bodybuilders and fitness competitors who will be pro superstars of the future.

The Weider posing team posed 3 times on both Saturday and Sunday making a fantastic feast of muscle for their fans to enjoy.  Now to the women of the Weider Show.  The star was German Professional HEIKE JUNG.  She gave a powerful display in a style and condition reminiscent of KIM CHIZEVSKY at her best.  Starting in a black cape she soon revealed a world class physique.

Belgian pro GERDA FANNES impressed me with her style, shape, size and excellent condition.  These names above are presently unknown in USA but I hope that GMV can help to change this situation by promoting the many wonderful physique and fitness stars of Europe.

MC of the Weider Show was the wonderfully loud and exuberant Harry De Jonge of Holland.  He even took his top off and posed in one of the shows.  Harry helps make FIBO the vibrant, exciting, unique event that it is. The only small negative was the ridiculous pink and /or blue lights used to light much of the posing. This is bodybuilding and not a disco or rock concert. The strobing and flashing lighting was somewhat insulting to both the pro bodybuilders and the fans during their posing routines on the main show stage.

Bodybuilders and body painters HOLGER SPREER and his lady, the beautiful fitness competitor ESRA KARGA certainly opened my eyes! Both topless, Holger wore just trunks, and for Esra just a bikini bottom, with their upper bodies painted to represent tank tops.  They are known as “Human Eclipse”.

I also taped German bodybuilder and kick boxing champion ISSA FADI. He was one tough dude in fantastic condition.  Also selling photos was DAWN SUTHERLAND, fresh from her recent Ms International Pro debut at the Arnold Fitness Weekend.  It was a shame she was not booked to perform on any stage.

We spoke to DORIAN YATES who was promoting his 2002 Dutch Pro GP with partner Papa Mike.   We then taped 4 top Dutch bodybuilders thanks to Papa Mike and they were STEVEN DE WINDT, PHILIEP VAN NUFFEL, and 2 women MARJOLEIN SCHILPEROORT and SANDRA WATERSCHOOT. Philiep actually represents Belgium in contests.

We also shot a feature at FIBO (workout, posing in various outfits and interview) with LIZZY TAYLOR.  Lizzy is quite a star in Germany and we first met at my Legends Reunion in October 2000 in California.  On the SVH video stand I spotted WFF World Junior Champion POLI MOUTEVELIDIS, just as we were packing up the equipment after 4 exhausting days.  I also spotted WFF female star SUZI MALEKPUR-SHIRAZI.  Oh well, you can’t capture everyone and this year was a record haul of bodybuilders that we did manage to tape.

My old friend and co-owner of AllStars, Stephan Korte, always gives us every assistance from our front of stage, on stage and rear of stage taping positions.  He also provided a small gym area where we could shoot workouts and pumping up.

We shot gym workouts or special pumping and posing sequences with many of these stars, and highlights will appear in each of the separate men’s and women’s FIBO videos to be called FLEXING AT FIBO 2002.

With the women, SUSI NIEDERHAUSER was in her all time best condition as she prepared for her pro show debut in Texas several weeks later. (She won her class in the Texas event and gained her invitation to the Ms Olympia at her first pro show!) Her arms and abs were particularly outstanding and I was most impressed by her rock hard condition and the appealing package she presents as the new look preferred in women’s bodybuilding. I wish her all the best in her pro career.

There were 2 new fitness women who absolutely amazed me with their incredible physiques (not a word usually associated with fitness) and their stunning routines.  REGGIANI DA SILVA from Brazil and now living in Madrid is destined to be a superstar – not only in fitness but in movies as well.  Her routine is electric and she throws a switch and goes into overdrive when she hits the stage. Personality, looks, perfect skin, brilliant routine and a body that could win NABBA Universe Figure titles is just a very modest description of this rising star.

The other fitness star who greatly impressed me was GABRIELA MLSNOVA. She performed a gypsy style routine full of power, grace, style and pure sex appeal.  Her physical shape was also extraordinary and with the best calves I saw at FIBO this year, she could also be a star in Figure Class or Women’s Bodybuilding, such are her genetics. Both these women are quite tall. Watch for their names as they obtain more publicity in the next year or so.  Also spotted at the AllStars booth was MARJA LEHTONEN of Finland.

A special thanks to my hard working team of Clive Jaques and my two sons Sean and Justin.  Also thanks to Willy Zdenek, Harald Kohler, Thomas Klose and Dennis Schaeffer for their help and support.