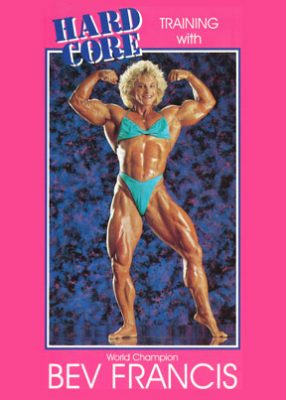 Bev takes the viewer through a complete hard-core workout using the heavy poundage she hereself uses daily in training. After watching this video, you will understand why Bev Francis was considered by many to be the most muscular woman in the world.

BEV FRANCIS was born in Australia and is a 1976 graduate of the University of Melbourne. She became a high school physical education and mathematics teacher while pursuing her successful athletic career. In 1977 she broke the Australian shot put record and was a member of the national track and field team from 1977 to 1982.  She competed in both shot-put and javelin. From 1980 through 1985 she was powerlifting World Champion, and was never defeated in any powerlifting meet during her 9-year career in that sport.

She began training for competitive bodybuilding in 1983, and was immediately introduced to the world via her featured film role in “Pumping Iron II – The Women.  It was then she met her future husband, Steve Weinberger. Eventually bodybuilding won out over powerlifting in her life and in 1987 she became IFBB Women’s World Professional Bodybuilding Champion. The most consistent finalist in the history of the Ms. Olympia contest, she owns five coveted Ms. O bronze and sliver championship medals.

This video is not for beginners! Although novice bodybuilders will gain excellent lessons in technique and form watching the program. Bev takes the viewer through a complete hard-core workout using the heavy poundage she uses daily in training.