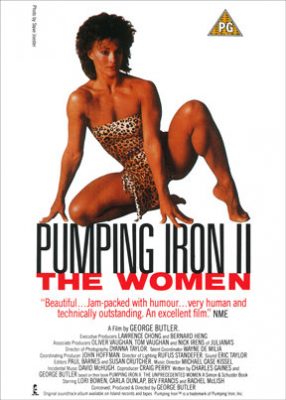 LAS VEGAS, 1983, and the run-up to the finals of the Women’s Bodybuilding World Cup championship.  Competition for the $50,000 first prize is fierce and emotions run high, especially when Bev Francis enters the arena. Bev, an Australian and World champion powerlifter whose incredible physique puts her firmly in the Schwarzenegger class, presents a serious challenge to the more sleek competitors – as well as the judges.

Pumping Iron II was produced as a follow-up to the groundbreaking 1977 film Pumping Iron. By the late 1970s, women had discovered the sport of competitive bodybuilding and were doing the same kind of training as their male counterparts. The Caesars Grand Prix World Cup was a contest created specifically for the film. The international field of 15 competitors was by invitation only and the women were hand-picked by the production staff of the ‘Pumping Iron’ movie.

The greatest focus is on Bev Francis and Rachel McLish. Bev Francis had no bodybuilding experience when she arrived in the US and was trained during filming by 1972 AAU Mr. America, Steve Michalik, who also guest posed in the film. Bev later became one of the top competitors in the sport in the late 1980’s. In the Ms Olympia competition, Bev was 3rd in 1988 and 1989 and 2nd in 1990 and 1991.

McLish, a two-time Ms. Olympia winner (1980 and 1982), was the most successful woman in the sport’s history at that time. She had done more than probably any other woman to popularize the sport, and is still active and a popular icon of women’s bodybuilding today. Bev and Steve run the extremely successful Bev Francis Powerhouse Gym – “The East Coast Mecca of Bodybuilding” – located in Syosset, NY.

There are some gym training scenes as the women work out, and the stage competition held at the famous Caesar’s Palace in Las Vegas. Here they are judged and compared in the traditional way, through to the final awards.

Some comments and quotes on the film:

“In the end Carla Dunlap won the contest, (a very worthy winner as 1983 was a big year for Carla Dunlap – she also won the 1983 IFBB Ms. Olympia title), Rachel was third and Bev was eighth out of fifteen. As Francis said, “I should have been first or last – not slap in the middle.”

“Lori Birdsong was not a pro and had less than a year of bodybuilding experience. She was a 22 year old model from Dallas who George Butler had picked for her wholesome All-American persona.”

“Excellent and very entertaining look at the world of female body-building.  Highly recommended.”   THE VOICE.

“. .the most peculiarly enthralling documentary for some time.”  MONTHLY FILM BULLETIN.