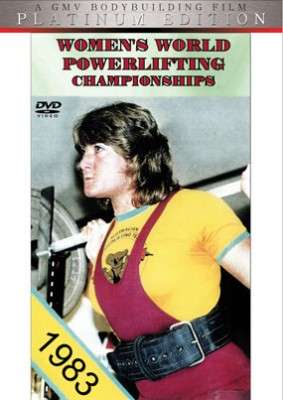 The classic 1983 World Women’s Powerlifting Championships was held in Adelaide, Australia. History was made in that for the first time in powerlifting history, USA was beaten by Australia in a team sense.  Features Bev Francis.

The classic 1983 Women’s World Powerlifting Championships was held in Adelaide, Australia. History was made, because for the first time in powerlifting history, Team USA was beaten by Team Australia. Many contributed to this success, but none more so than Bev Francis who lifted like she was on another planet.

12 world and 16 Australian records were broken at this benchmark contest.

The event was a superb presentation of some of the finest women strength stars in the world.  The competition has now gone down in history as a classic example of victory through team work.

See BEV FRANCIS in the days when she was a world-champion power lifter, before bodybuilding, and before becoming runner-up Ms Olympia! She started most of her first lifts when everyone else in her class was finished!

The previously undefeated Americans fell before the depth of the Aussie team. Not only powerful benches, backbreaking deadlifts, but also grunting squats. An awesome show of strength by these unbelievably strong women.

Front cover photo by Mike Lambert shows Gael Mulhall of Australia, winner of the 90 kg class (198 lbs) with a total of 1157 lbs.

On a historical note, this is the first contest shot on videotape by GMV.