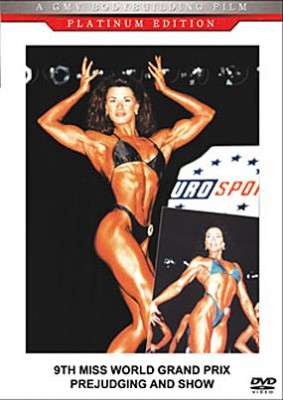 It  became a battle between Susana Palma of Spain and Australia’s Diane Jardim for the top honour. Diane was the winner of this particular battle in an extremely tough line-up.

This amazing contest brought together the cream of NABBA’s figure class competitors from Europe, U.K. and Australia. Held as part of the 1996 German NABBA National Championships (see details below) in the magnificent Jahrhunderthalle in Frankfurt, 23 incredible figure women took to the stage.

It was obvious from the first call-out that the battle was between Australia and Europe, and it eventually became a contest for the number one award between Susana Palma of Spain and Australia’s Diane Jardim. (Diane is shown front cover main image and Susana is shown lower front image. Sabine Weeke is the larger image rear cover).

Diane was the eventual winner of this particular battle in an extremely tough line-up of champions. The German audience was very appreciative of this top international lineup, and called out for their favourite competitor regardless of the country of origin.

This DVD includes interviews with 6 of the top competitors and presents the complete contest, prejudging and show, with all round one comparisons, all round 3 compulsories and the full posing routines of all 23 fantastic competitors.
The posedowns and awards are also included. This is the highest standard Women’s Figure Contest DVD we have ever offered.