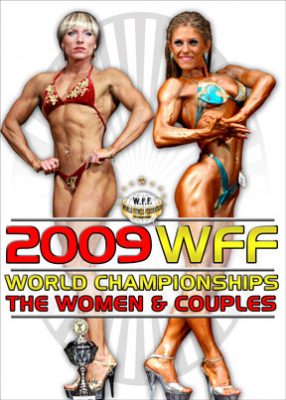 This major international bodybuilding and fitness event attracted an outstanding quality field of competitors from around the world. The WOMEN’S DVD covers all the action from the Women’s Classes and the Couples Class.

Held in Lebach, Germany, on 31st October, 2009, this major international bodybuilding and fitness event attracted an outstanding quality field of competitors from around the world.  The WOMEN’S DVD covers all  the action from the Women’s Classes listed below and the Couples Class:

The DVD includes the 3 complete rounds for every class, including the posing routines of every single competitor along with the awards and overall section posedown where relevant.
Of particular interest is the emerging new Russian star in the WOMEN SUPERBODY CLASS by the name of Zhavora. From the body language of the Russian runner up, Natalia Zhavora, she felt that the judges were hard on her in placing Kristina Kudynova ahead of her. Although she placed second, we are using her photo, front cover (left), to show what outstanding potential she has and what a physique this young lady has already achieved. I feel she is a future NABBA Universe Class winner with her symmetrical shape, clean lines, muscularity and excellent genetics.

Countries to dominate at this year’s contest were Lithuania and Slovenia. This was an amazing effort from such small countries. The contest was expertly run and promoted by Tamara Konz.
My special thanks to Marcus Schlager, President NABBA/WFF Austria who was responsible for getting me to this contest and assisting in the DVD production.

Photos by Aldo Wipfli, Wayne Gallasch and some courtesy WFF.

RESULTS FOR THE CLASSES SEEN IN THIS DVD: WOMEN & PAIRS