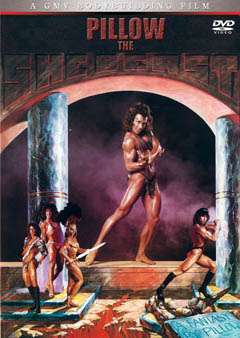 In this 60 minute DVD enjoy an in-depth look at PILLOW, the famous American bodybuilder and Alaskan exotic dancer.

In this 60 minute DVD enjoy an in-depth look at PILLOW, the famous American bodybuilder and Alaskan exotic dancer. We explore the many moods and many faces of the modern 80s Wonder Woman of the Weights – PILLOW, a true champion of the sport.

We taped PILLOW both in the studio and on sunny Venice Beach, California, on the day she won her class in the 1983 Gold’s Classic in Los Angeles. Throughout the video she wears a number of different outfits, and she poses (briefly) topless in a short tasteful scene. We have included a series of colour stills from our private collection. They are dynamic and unique, and were taken with PILLOW in top condition, during the same period the video was shot.

This is an historic DVD from 1983, code numbered GMV #1, as it is the first GMV video release that was fully shot on video tape. Formerly all our productions were shot on film.

PILLOW is also known as “The She-Beast”. This very beautiful and muscular lady accepts no limits as she strives to reach naturally her full and incredible potential.  Pillow is now quite a cult figure of women’s bodybuilding.

The video ends with the exciting and emotional overall contest victory by PILLOW at the Gold’s Classic. We have now released our second DVD on PILLOW as she struts her stuff at PJ’s in Alaska.