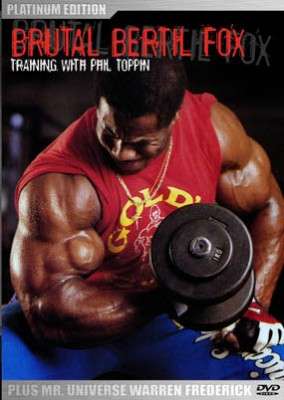 This video was originally shot in 1974 and 1976 when the featured bodybuilders, Bertil Fox, Phil Toppin and Warren Frederick were at, or close to, the peak of their careers.

Shot in London in September 1976, right after Bertil had placed 2nd to Kozo Sudo in the ’76 NABBA Universe, the first part of this video explores the FOX/TOPPIN training team. A complete gruelling workout, with muscle flexing between exercises. Full screen closeups of Bertil’s arms as he presses the biggest pair of dumbells ever seen! The final segment is Bertil posing in a South London park, plus an intense posedown with Toppin. A young Fox at his peak! Brutal Bertil won three Universe titles, and went on to become a top IFBB Professional.

A fascinating feature shot in London just after Warren placed 3rd in his class in the 1974 NABBA Universe. An exhaustive muscle display with stunning closeups of oiled flexed muscle with bulging veins and plenty of Warren’s famous tattoos. Warren was the unofficial Most Muscular Man “winner” at the Universe, with a physique in the style of Branch Warren. His huge arms and amazing abs are unbelievable. This 60 mins feature was shot on colour film, no live sound, with music sound track added.