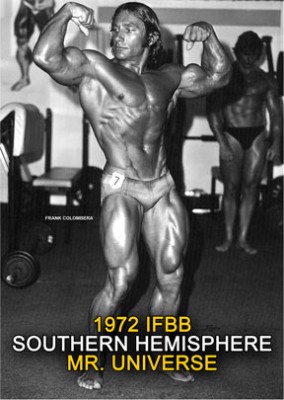 This ground-breaking contest for Australia was staged at the Chevron Hotel and promoted by Bob Bruce and his company called 1971 Physique Show Promotion.
The very special Star Guest poser was ARNOLD SCHWARZENEGGER in his first ever appearance in Australia, assisted by training partner and fellow guest poser FRANCO COLUMBU. At this stage Arnold was the 1970 and 1971 Mr. Olympia winner. Arnold won 7 Mr. Olympias in total. Franco later won the Mr. Olympia in 1976 and 1981. The event created the most excitement I have ever seen at a contest in Australia.

This is followed by more posing by Clyde Bird, and then some awards for 1st to 3rd as follows in this order – George Seredynski, Clyde Bird and Robert Deegan.

Next it is the Special Guest Posers ARNOLD & FRANCO doing their famous duo posing routine followed by Arnold posing solo.

See Bob Bruce handing over the cash prizes to Frank Colombera and George Seredynski also gets an award. Followed by the winners posing with Arnold.

Then it is the 1972 MR. AUSTRALIA HIGHLIGHTS:

With posing footage of Sonny Gloynes, followed by Frank Colombera (winner), Paul Graham and John Koziura with Lineup and Awards. Rare historic footage at the first Mr Australia I attended. I believe that Sonny won the Novice Mr. Australia title.

On the day after this Southern Universe contest, I shot my classic pumping and posing films with Arnold and Franco poolside at the Chevron Hotel pool in Surfer’s Paradise.