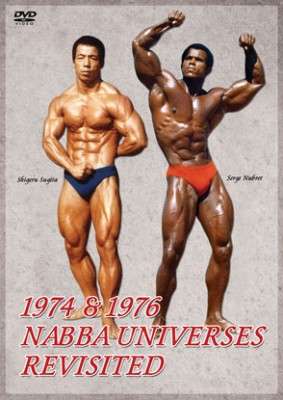 1974 and 1976 were two of the all-time classic years from the Golden Universe years of the mid seventies.

Kellie Everts from USA was a noticeable standout in the ’74 Bikini Universe in her own very special way. However she failed to impress the judges, even though she was a huge hit with the audience. Here is what was written at the time:  “When Kellie Everts came out to pose, she almost got a standing ovation, but the judges only gave her #5 out of nine! She laughed it off and vowed to turn it into a success. In her mind, the contest itself was a paid trip by Dan Lurie to learn something, make observations, and drum up publicity (for both of them). There are various ways of winning.”

She certainly helped raise the profile of the Bikini Class and garnered much extra publicity for NABBA. The Miss Bikini Class winner was Linda Cheeseman of UK.

The champions from 1976 include Sugita, Herder, Sudo, Fox, Adrian, Nubret, Emmott, Dickerson and more. Classic muscle from some classic physique stars of the past.