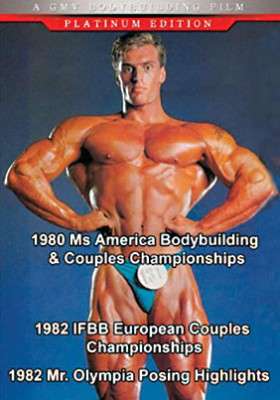 3 Great Contests in one historic vide3o.  Exceptional physiques and staggering posing performances by CHRIS DICKERSON, FRANK ZANE, CASEY VIATOR who were top 3 in that order and more. All in rock hard, cut to ribbons condition. Plus the sensational BERRY de MEY along with his winning partner in ERICA MES as they take out the European Pairs title.

3 Great Contests in one historic DVD.

This was an exceptional show, sponsored by Gold’s Gym of Santa Monica and held in the famous Santa Monica Civic Auditorium. See famous early female bodybuilders battling for top honours.

Star of the show was a ripped, lean and muscular LAURA COMBES (pictured left) from Florida. She was too strong and symmetrical for the very talented Claudia Wilbourn and the fast rising stars of Kay Baxter and Carla Dunlap.

Carla went on to win the 1983 Ms Olympia title. Claudia Wilbourn was also a top pro bodybuilder. These women were the pioneers of women’s bodybuilding. Unfortunately Laura and Kay both subsequently lost their lives in accidents.

Other stars who impressed me in this event included Shelley Gruwell and Gail Schroeter. Gail had more the style of physique in women’s bodybuilding today while Shelley was more the Figure type of body. The top 10 are as follows:

Only the top women are shown in our DVD segment.

In the American Mixed Pairs Championships held on the same night, see the superbly performed posing displays from stars such as the winners SHELLEY GRUWELL & JOHN BROWN. In second place it was CARLA DUNLAP & JOHN KEMPER from the Diamond Gym in NJ.

Wonderful posing and pose-downs – it’s all there in this classic blast from the past. This is probably the first women’s bodybuilding contest ever filmed by GMV.  Trophies were presented by Lou Ferrigno in this exciting display of female muscle!

This event was held at the Wembley Conference Centre, London as  the amateur event at the Mr. Olympia contest which was later that day. It produced a fine display of mixed pairs competition and introduced to the world the sensational BERRY de MEY along with his winning partner in ERICA MES. This Dutch pair, pictured below, took the event by storm with a stunning display of muscle coupled with their elegant posing. Berry went on to be a major IFBB star in the Pro ranks. Erica also competed in the Ms Olympia.

In the end it was a clearcut victory for the stunning couple from the Netherlands, Berry de Mey and Erica Mes. Close between them was Keijo Reiman and Marjo Selin from Finland in second place. Third place went to Gabriel Wild and Hildegard Schaefer of Germany.

You also see posing highlights from other top couples. A great mixed pairs sequence in the true IFBB tradition. The first 2 parts of this DVD run for 50 mins.

In this segment we present posing highlights from the finals of the most prestigious contest in the world. Exceptional physiques and staggering posing performances by Dennis Tinerino, Roger Walker, Johnny Fuller, Jacques Neuville, Danny Padilla and Boyer Coe. All in rock hard, cut to ribbons condition. This segment runs for 11 mins.

This diverse collection of contest material from the early eighties will be of great interest to all bodybuilding enthusiasts and certainly become a collector’s item DVD. Although a very good presentation, due to typical contest lighting of the time and film camera technology, it may lack in places the usual crispness and clarity we associate today with our DVD releases shot on modern video cameras.

This footage was all shot on super 8 film, transferred to tape and then digitally re-mastered to DVD, with music added.