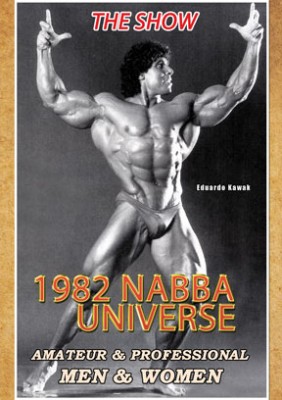 The Show: The main stars of this event were Eduardo Kawak of Lebanon, Kal Szkalak and John Brown from USA, John Terilli from Australia and Terry Phillips from England. In the Women’s International Bikini class the red hot favourite was Jocelyn Pigeonneau who did not let her fans down.

The 1982 NABBA UNIVERSE – AMATEUR & PROFESSIONAL, was held at the huge Wembley Conference Centre, London on 18th September, 1982. The main stars of this event were Eduardo Kawak of Lebanon, Kal Szkalak and John Brown from USA, John Terilli from Australia and Terry Phillips from England.

John Terilli’s class victory was the first ever Universe victory by an Australian competitor who grew up in Australia. (He was born in Italy and was brought to Australia as a baby.) John later won the NABBA Pro Universe in 1994.

Ed Kawak won the Universe 5 times during his illustrious career and is pictured front cover in his signature pose. This record of 5 titles was later equaled by Eddy Ellwood who won his 5 Universe titles consecutively. Famous American Kal Szkalak was one of the training partners of Arnold Schwarzenegger in the latter stages of his career. Kal similarly had great charisma and was a standout at the Universe with his many fans. It was a pity that Kal did not come back again to claim the title that many said would be his for the taking!  Rod Koontz was another highly rated and very popular star from USA.

The FULL RESULTS are found below, listing every single competitor.

1. The DVD was shot by one of GMV’s UK cameramen, and includes the main highlights of the whole event – from Prejudging and Show. Regarding video quality, it was shot with the existing technology of the late 70s and as such is very average. The picture is watchable and historically extremely important being the only record of this contest. The images are however a bit grainy and ordinary by today’s standards. After all, this was shot well over 30 years ago.