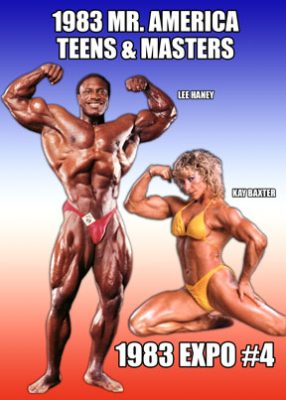 In the Masters Division, NORM RAUCH had too much size and condition for the many other outstanding physiques such as James Joseph, Don Knipp, Doug Beaver, Don Peters, Tom Harrington, Tim Sweeney and Monroe Huel. Full RESULTS below.

One week later I filmed the Highlights at the 1983 BODYBUILDING EXPO 4, Disneyland Hotel Convention Centre, Anaheim, CA on August 13-14, 1983.
Expo 4 was a feast of star guest posers at this wonderful Wally Boyko Extravaganza. Wally created and produced the first NPC sanctioned Bodybuilding, Health & Physical Fitness Expo in the United States.

At the Expo there was an NPC Women’s Contest where the Results were as follows: