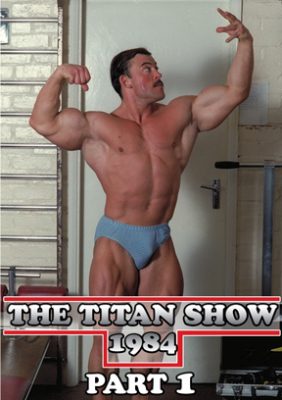 The Titan Show is a “London bodybuilding institution” having become a famous annual event staged under NABBA rules. It is for men and women and stars Geoff Wynn (the winner), Ken Clarke, Kevin Duggan and Wendy McClary plus many more top physiques of the day.

Geoff Wynn (pictured on the front cover) was an outstanding British physique star of the 1980s and deserves more recognition.

Just like the Titanic, the show is HUGE! Winning this show is a stepping stone to a great career in bodybuilding.