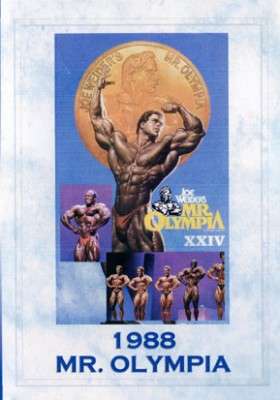 You see the complete routine of every competitor.  This is followed by the top 6 posedown and awards.  The quality of this video production is absolutely outstanding.

Haney wins with a perfect score in what was the largest-grossing show to date in the Universal Amphitheater in Los Angeles. This beautifully staged contest remains a classic and all-time favorite featuring great bodybuilding stars.

Over 6,000 fans gathered at the Universal Amphitheater for this main event. It was the only Olympia in which the contenders were officially weighed, at a press conference on Thursday, September 8th, 48 hours prior to prejudging. Each entrant had an identical boxing robe as they came in to be weighed, providing a mystique but even playing field to the whole procedure.