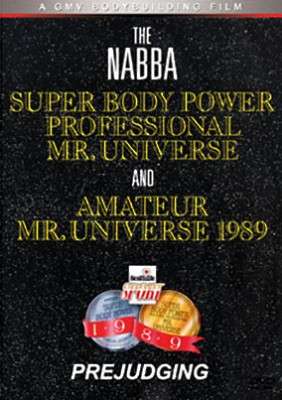 102 superbly muscled and buffed athletes – the largest field of competitors ever seen at the Universe – gathered from all over the world to battle it out for the top titles. In the AMATEUR DIVISION, the Short Class 3 winner was the current Mr. America – MATT DUFRESNE.

This was the last Universe to be held in the famous Wembley Conference Centre in London.   102 superbly muscled and buffed athletes  – the largest field of competitors ever seen at the Universe – gathered from all over the world to battle it out for the top titles.

In the AMATEUR DIVISION, the Short Class 3 winner was the current Mr. America – MATT DUFRESNE. He was Mr. Perfection and had it all from his superbly sculptured abs to his perfect aesthetic proportions, symmetry and razor sharp condition.  It was the big year of his career winning the overall title at the Mr. America as well as at the Amateur Mr. Universe.

CASEY KUCHARYK of USA was the Medium Class 2 winner. It was a tough call for the overall title that Casey had to come up against 2 other great stars in Matt Dufresne and Gary Lewer of Australia. I have seen Casey many times over the years and this was his year. He was “ready”, he was super shredded with paper thin skin, and I know he was very disappointed at not taking the overall title.

GARY LEWER of Australia was also in his best ever condition as he took out class 1.  He had been coming up each time in the placings at the Universe and doing better every year. Big and muscular with great size, especially in the upper body, Gary dominated Tall Class 1. Gary has charisma as well as a superb physique.

JUNIOR CLASS
In the Junior Mr. Universe Class (under 21 on the 1st day of the year) it was a very tightly fought battle between the 2 Aussies, MICHAEL MELKSHAM, PETER WALL (Mr. Symmetry) and the ripped young CLINT DYE of England. Massive and ripped Michael finally took the title with predictions of a great future for him.  Peter Wall was a former teenage Mr. Australia.

PROFESSIONALS
In the professional division, local English favourite CHARLES CLAIRMONTE beat out the challenge from Olympia competitor and 5 times Mr. Universe winner EDWARD KAWAK of France. This was a 3rd Universe title for Charles, with his huge yet elegant and ripped physique overcoming and out muscling the sheer brutal mass and power of Kawak.

Prior to the evening show we interviewed the famous REG PARK, plus top competitors both men and women.  The DVD includes the complete posing routine of every competitor plus key comparisons.