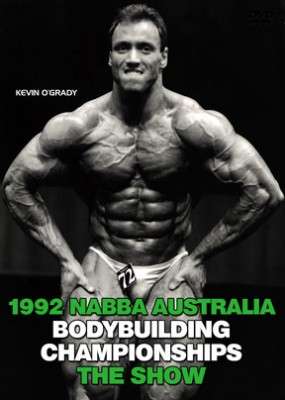 From this fine selection of muscular talent, a team was picked to contest the NABBA World Championships. Some of our Australia’s champions went on to become World Champions, as KEVIN O’GRADY (overall Mr. Australia) won the Tall Class Mr. World title.

Physique champion DEBORAH COMPTON, and Figure star SAMI RENOUF were clear winners in their respective classes and both achieved second placings in the Overall World championships.  Also included is a very strong Men’s Teenage division, plus the Men’s Masters Class.

Our Show DVD capture all the excitement and tense posedowns from the Australian event, and posing routines of all competitors. The DVD also includes a tense and exciting posedown for the overall title won by KEVIN O’GRADY.

Held at the same venue as usual at the Dallas Brooks Hall, and we all wondered whether the physiques would be up to the usual incredible standard.  THEY WERE ABSOLUTELY SUPERB, and completely silenced the critics who said Australia could not muster another outstanding international team!!

43 top physiques took part – Australia’s best men and women as they lined up for THE SHOW.  See the complete SHOW for every class, Men and Women from start to finish, from all the posing routines to all the awards.

The main stars at THE SHOW were the various class winners as follows: