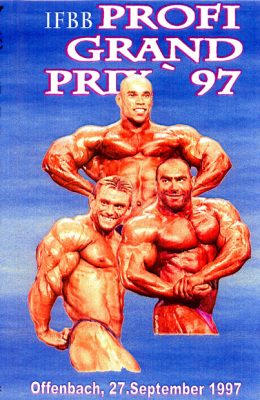 Another of our gems from the 1990’s.  Top three were Kevin Levrone, Nasser, and third Lee Priest.  Ronnie came in at 5th, Paul Dillett 4th.

The 1997 German Grand Prix was held in Offenbach on September 27th. It was virtually a rerun of the Mr Olympia minus the winner in Dorian Yates. At the Olympia Nasser placed a very close second with Shawn Ray third, Kevin Levrone 4th, 5th was  Paul Dillett and Lee Priest was 6th. This contest proved to be a real “boilover” with the placing unpredicted as follows: Kevin Levrone was the winner, and once again Nasser was denied victory. Lee Priest moved up to third and the rest is history.