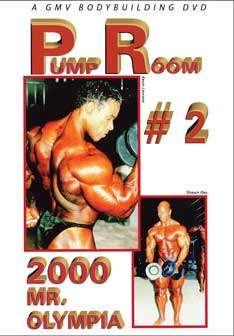 See the normally private back stage pump up area and hear the final instructions to the nervous, tense competitors, all trying to gain the edge. Most fans never ever get the chance  to set foot in this pump room area. This is your chance to see what really takes place back stage at the Olympia!

See the drama of Flex Wheeler in agony over a displaced vertebra in his neck. Then the final pumping and oiling – just that little bit extra that is needed to secure the crown of Mr. Olympia for 2000.

There’s lots of posing for stills backstage in the photo booth, particularly by Ronnie Coleman. Wayne’s camera takes full advantage of this, slowly panning over bursting, rippling muscles as the guys hit all of their best poses, veins bulging. Most of the stars of the 2000 Olympia are seen in this DVD – in closeup!!

BONUS:
Includes 2 star interviews – one with Mr Olympia founder, JOE WEIDER, and the other with CHRIS DICKERSON, winner of the 1982 Mr. Olympia.