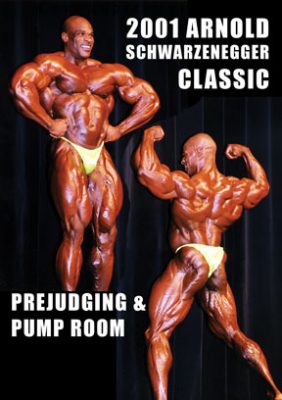 This video contains the following: Prejudging pump room, Back stage oiling, Prejudging highlights, Prejudging routines and so much more.

This is the earliest Arnold Classic event to be released on DVD and the first time for GMV to be shooting at the famous Arnold Classic. Originally we released all our men’s footage from this contest split over 2 videos. Now it is all together as one huge SUPER VALUE DVD of the men’s event.

The 2001 Arnold Schwarzenegger Classic was held at the famous Veterans Memorial in Columbus, Ohio. It is the home of many Mr Olympia contests of the past.

It created history with Ronnie Coleman (pictured front cover) being the first Mr. Olympia to win the Arnold Schwarzenegger Classic.

Part 1 which runs for 74 minutes contains the following:

Prejudging pump room
Back stage oiling
Prejudging highlights from side of stage including front comparisons
King Kamali posing for photos in the photo booth.

(It was not permitted for us to record the men’s prejudging only from the front-on position in the photographers’ pit, so we included our best side-on highlights instead.  ALL FINALS FOOTAGE WAS SHOT FROM THE CENTRE FRONT OF THE PRESS PIT