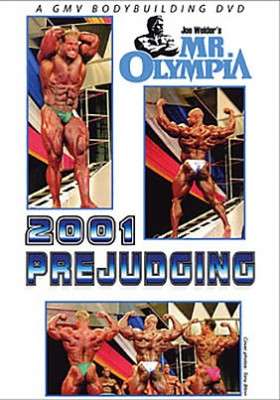 The first “modern-day” Mr. Olympia Prejudging as a download.  The “real contest” at the Mr. Olympia was the prejudging. It was a titanic battle between the monstrous marvel RONNIE COLEMAN and the ripped golden boy JAY CUTLER.

SEE THE MR OLYMPIA PREJUDGING FOR THE FIRST TIME EVER AS A DOWNLOADABLE VIDEO!

THE COMPLETE PREJUDGING of the 2001 MR. OLYMPIA!!

The video starts with highlights from the pump room and then moves into the complete prejudging.  The “real contest” at the Mr. Olympia was the prejudging.  It was a titanic battle between the monstrous marvel RONNIE COLEMAN and the ripped golden boy JAY CUTLER.  Jay led by 6 points at the end of Rounds 1 and 2 – but Ronnie later posed his way to a very narrow 4 point victory. Did Ronnie deserve to win? You be the judge.
Jay Cutler came from nowhere to capture second place. We also saw one of the favourites in Chris Cormier go to 5th place and Nasser El Sonbaty drop to 9th place. It was an extremely exciting evening Finals show!

This Prejudging DVD presents all the action from the solo poses of Prejudging Muscularity Round 1 and all the top guys shown in the ¼ turns of Symmetry Round 2.  Includes all the excitement of the complete compulsory comparisons through to the final callout which was Jay versus Ronnie.

The most exciting Mr. Olympia in years!!

This DVD is the first ever offering of the complete Mr. Olympia Prejudging.  90 sweat filled minutes of awe inspiring muscle war. Shot by GMV Productions  in association with Magna Media International.