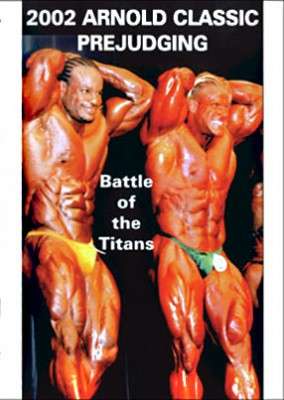 See a ripped JAY CUTLER overcome a superbly conditioned CHRIS CORMIER. We explore every sinew – every striation – the vascularity – in extreme closeup.

FOR THE FIRST TIME EVER!! THE COMPLETE PREJUDGING FROM THE ARNOLD CLASSIC!!

See a ripped JAY CUTLER overcome a superbly conditioned CHRIS CORMIER, as Jay walks away with the cheque and the Hummer.

Not a single pose or comparison is omitted as you get a “fly on the wall” view from the CENTRE of front row of the photographers’ pit during rounds one and two of the prejudging.  We explore every sinew – every striation – the vascularity – in extreme closeup.

During each of the muscularity callouts – such as “abs and thighs”, the camera roams over the muscle in the most amazing detail – you’ve never ever been this close before! This is the only front-on view of these men as we had to shoot the evening FINALS from the rear of the stage, giving a reverse angle view.

Who would have thought in 2002 that in 2007 we would see VICTOR MARTINEZ as the winner of the Arnold Classic!