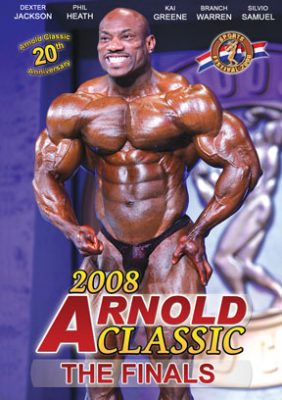 You will see the exciting opening of the show, then all 15 athletes perform their complete posing routines through to top 6 posedown and awards.  See Arnold’s very humorous interview of Dexter Jackson plus final victory posing by Dexter.

This was the 20th Anniversary Arnold Classic Show.

At the Finals an elated DEXTER JACKSON did join Jay Cutler as a very worthy 3 time winner of this event. PHIL “The Gift” HEATH pushed Dexter all of the way with his superb shape, symmetry and new improved size.  However Dexter displayed an overall package of muscle maturity and hardness that proved to be the best on stage this year with Phil not far behind him. Phil took home prize money of $75,000.

The big surprise to many was the 3rd place finish of KAI GREENE who took home $50,000 and a lot more prestige than he has enjoyed from any of his previous pro placings. This man is a real contender. In 4th place with $30,000 it was BRANCH WARREN who also took out the Most Muscular Award and a magnificent Joska Kristall trophy. 5th place and $15,000 went to SILVIO SAMUEL with 6th place and $10,000 going to GUSTAVO BADELL.
MELVIN ANTHONY received $10,000 for winning the Most Entertaining Posing Award. This was no surprise although Kai Greene gave him a real contest!

You will see the exciting opening of the show, then all 15 athletes perform their complete posing routines through to top 6 posedown and awards.  See Arnold’s very humorous interview of Dexter Jackson plus final victory posing by Dexter.

This FINALS disc has been edited from 4 different cameras using the best angle and the best possible image of the bodybuilders at all times. The footage was shot from Wayne’s central camera position in the press pit and from the 3 house cameras of LIVE TECHNOLOGIES, producing the best ever Arnold Classic Finals DVD.

Of very special importance were the Lifetime Achievement Award to BEN WEIDER, the special tribute to REG PARK and the introduction and presentation of all Past Winners of the Arnold Classic. These segments are included in their entirety. Plus much more in the Extra Features of the DVDs including 2 separate Photo Galleries. The Photo Galleries are by Raymond Cassar of Muscletime and Gary Phillips www.garyphillipsphotography.com .
This 2 DVD set runs 4 hours and our interviewer Kenny Kassel also did the introductions at the Prejudging. Finals MCs were Lonnie Teper and Clint Richards.

The Finals including presentation of all 12 Arnold Classic Winners  93 mins
(Complete posing routines of all 15 Finals competitors, posedown and awards.)