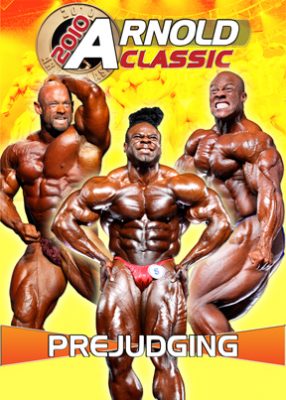 In this video you will see the complete 2010 Arnold Classic Prejudging from the first call-out to the last comparison.  One of the few times Kai Greene beat Phil Heath!

SUPERB MUSCLE ACTION FROM THE 22nd ARNOLD CLASSIC!!  KAI GREENE REPEATS TO MAKE IT TWO IN A ROW!

Kai Greene of the United States won the Arnold Classic bodybuilding competition at the 2010 Arnold Sports Festival.  A check for $130,000 was presented by Gerard Dente of MHP, a trophy was presented by Tim Bentley of GNC, an Audemars Piquet watch by Rhett Ricart, and a Tony Nowak jacket and congratulations from Governor Arnold Schwarzenegger.

Kai Greene also won the Most Entertaining Posing Award and a $10,000 check and trophy presented by Josef Kagerbauer of Joska Crystal. Branch Warren of the United States was awarded the Most Muscular Man Trophy presented by Rich Gaspari of Gaspari Nutrition.”

In this video you will see the complete 2010 Arnold Classic Prejudging from beginning to end.   Of special note, there were two cameras shooting spectacular closeups from different angles from the press pit!

The footage shot from Wayne’s central camera position in the press pit is recorded from what is generally regarded as the best “hardcore camera position” in the house. His footage is edited and mixed with the program feed from the 3 house cameras of LIVE TECHNOLOGIES, producing the best ever coverage for an Arnold Classic DVD.

This video is packed with the very best bodybuilding action on offer.

Please click here to read A brief History on the Arnold Sports Festival.