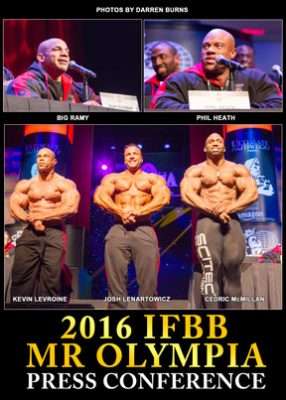 Some of the comments by reigning Mr. Olympia Phil Heath were fascinating. If you could not make it to the Olympia in 2016, you need not miss out on all of the action from the Orleans Theatre Press Conference.

This year’s Press Conference was one of the best ever with the return to competition of legend KEVIN LEVRONE after 13 years of retirement. As usual the Conference had its “edge”, superbly MC’d by Bob Cicherillo and Dennis James.

If you like a little fun mixed with a touch of controversy, this video will keep you interested for all of the 87 minutes. Some of the comments by reigning Mr. Olympia Phil Heath were fascinating. If you could not make it to the Olympia in 2016, you need not miss out on all of the action from the Orleans Theatre Press Conference.

The most humorous moments were the clever jibes by Dexter Jackson concerning the age and return of Kevin Levrone who was by far the oldest competitor seen on the Olympia stage in many years.

The bonus part for the fans was Kevin taking up the challenge to show what had underneath his tracksuit top, with a 3-way posedown between Kevin, Cedric McMillan and Josh Lenartowicz from Australia.

Beautifully edited with brilliant audio – All competitors speak during the conference and audio levels have been balanced between each speaker.

Phil Heath was the clear favourite going into the event and with Kai Greene no longer choosing to compete in the Mr. Olympia, there was no obvious close rival. As good as Dexter is, he was never going to topple “The Gift.”  In my opinion, the next best guy going into the competition was Shawn Rhoden. It proved to be so with Shawn clearly second and looking as good as I have ever seen him look.

Dexter was….. normal Dexter, always in top shape, always consistent and superbly conditioned. He was competing in his first Olympia back when Jay Cutler made his debut in 1999. Dexter placed 9th in that Olympia. This year he had to settle for 3rd.

In 6th place it was Roelly Winklaar, a fellow resident to Bonac from the Netherlands and also a big rival. Roelly frustrates me in that he also has the potential to truly challenge Phil. But there is that small something that is missing to really shake the title.  Winklaar owns a pair of the best arms and forearms I have ever seen, along with a killer most muscular pose. I feel that the area holding him back is the mid-section and keeping it totally under control at all times. If Roelly came in a little smaller, lighter and tighter I think he could push into the top 3.

In 7th place it was Cedric McMillan. I was shooting backstage throughout the contest, both nights and had a good look at Cedric close-up. He was extremely big and very impressive. His overall symmetry is good for such a tall guy and standing relaxed he looks near unbeatable with a hard grainy physique.  However I do not personally like his posing style which is classical posing and comes across as a little ordinary and slow in an Olympia competition. I know the judging compares the guys in compulsory poses, so I would expect that Cedric’s unique posing presentation probably has little effect on his placing. But I do not feel it helps. I would like to have seen him placed higher, probably 6th.

I do not know Josh personally and had never met him before this event. But I did feel he should have been placed 8th. It will be interesting to read what other scribes thought of his first Olympia appearance.

10th place went to first timer Justin Compton. Justin has a neat, compact physique with no real weaknesses and no outstanding bodyparts. He has a very good overall package, that simply needs more time, maturity and polish. Plus size as long as he keeps his good proportions. He has a great coach in Hany Rambod so expect big things from Justin in a few years’ time.

Although my comments are only on the top 10 of the 19 competitors, Kevin Levrone is worthy of a very big compliment for what he achieved. At age 53, and having not competed in the Olympia for 13 years, he made a most credible comeback. The success is not measured by his placing, equal 16th, but on what he gave the fans. He has a wonderful reception from the fans, presenting his classic upper-body poses to perfection and showing excellent condition and posing.

After so many years out of the sport and not training at all, his comeback performance was remarkable. Naturally the body-part that is hardest to regain with age is the legs. That is what really cost Kevin in the overall comparisons. But he can be totally proud of what he achieved, and went where no Olympian has ever gone before. Maybe we will see other retired Olympians come back for one more time. Jay Cutler, how about it?

(Wayne has been shooting film, video and photos at the Olympias since 1971 and been on the Olympia camera team since 1999.)