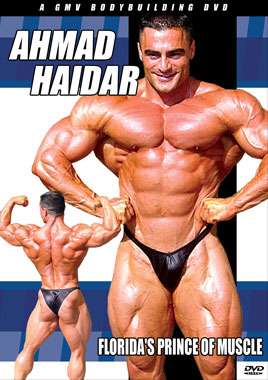 Since Ahmad Haidar burst onto the scene, he has become known (amongst other things ) for his amazing symmetry and fantastic abs.

Since Ahmad Haidar burst onto the scene, he has become known (amongst other things) for his amazing symmetry and fantastic abs.  See more of Haidar in this profile on his career since 1998.

You see him at the Olympia, the Arnold Classic and several Grand Prix and Iron Man Pro Invitational contests as he weaves his magic on the bodybuilding stage.  There’s also backstage footage of pumping and posing and a great little interview with Shawn Ray, backstage at the Olympia.

We also get up close and personal at the Mandalay Bay Hotel Pool, the day after the 2002 Olympia with Ahmad oiling, pumping and posing in awesome closeup after awesome closeup.  He poses alone and with his friend Tommi Thorvildsen in this wonderful DVD from GMV Productions.

In 2009 Ahmad placed 5th in the Iron Man Pro and so qualified for the 2009 Olympia which will be his 4th Olympia. Here is his outstanding contest history:

Ahmad Haidar Contest Record as at 2009