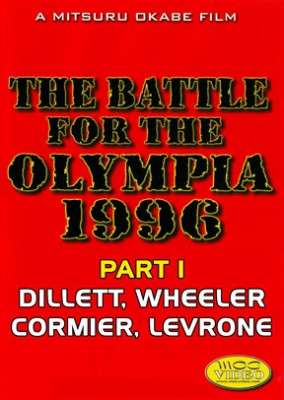 Battle for the Olympia 1996 – Part 1:  Featuring  Paul Dillett, Flex Wheeler, Chris Cormier, and Kevin Levrone:  This is where the “Battle” legend all began! The camera follows some of the top pros as they train and prepare for the 1996 Mr Olympia showdown! Let the battle begin!

Battle #1 – Year One! This is where the “Battle” legend all began! The camera follows some of the top pros as they train and prepare for the 1996 Mr Olympia showdown! Let the battle begin!

In this video see training, posing, talking and pumping as Paul Dillett, Flex Wheeler, Chris Cormier, and Kevin Levrone do their stuff.

This is one of the most powerful and hard core bodybuilding videos of all time.

“The Battle for the Olympia” series has become the most well-known series of DVDs after the Mr. Olympia series. This is DVD #1 from 1996.

Here is a brief summary of the 1996 Mr. Olympia.
The winner Dorian Yates was as incredible as ever such that no one could touch him. However, Nasser looked awesome and massive, with his back much bigger, wider and better than last year. Many people thought Nasser should have been crowned #1. However it all ended in disaster for poor Nasser when he was later disqualified.

Probably the biggest surprise of the night was Shawn Ray’s second place finish, over Nasser! Shawn looked incredible and the top five place finishers all looked great, and almost everyone said that this was the best Mr. Olympia ever. Judging by how close the results were, it was almost a case of anyone in the top 3 placings.  Only later on did we learn that Nasser failed the diuretics drug test, and was disqualified (he was announced in 3rd place that evening).   A surprise in 9th place was the sensational Charles Clairmonte from UK who was in our opinion – completely overlooked.

See our complete INDEX LISTING of all Battle for the Olympia DVDs.