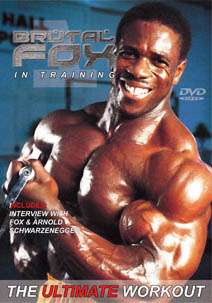 After winning every NABBA title available to him, Brutal Bertil Fox came to the IFBB pro ranks in 1981. Naturally Bertil sent shock waves through the ranks world wide.

After winning every NABBA title available to him, Brutal Bertil Fox came to the IFBB pro ranks in 1981. Naturally Bertil sent shock waves through the ranks world wide.

He rivaled Sergio as the all-time king of mass and power. A regular competitor through the 1980’s, he could never quite eke out a win in the IFBB. He compete in the Mr Olympia a number of times with placings as high as 5th (1983), 7th (1986) and 8th (1982). Many I times I heard the crowd sceaming “Beef, Beef” or “Beef it Bertil, Beef” at the prejudging. He was a true cult figure at the time, hitting most muscular after most muscular poses for his adoring fans.

This workout video was shot at World Gym in 1985 when Bertil was at the peak of his career. See him go through a gruelling workout with weights you can hardly believe.

NOTE:  THE QUALITY OF THIS HISTORIC VIDEO IS NOT AS GOOD AS WE WOULD LIKE.  PLEASE CHECK THE SAMPLE BEFORE COMMITTING TO PURCHASE.

Without question the size, shape and power of BERTIL FOX’s arms with the ability to do chins with over 200 lbs. strapped to his waist, curls with nearly 300 lbs, and slow concentration curls with 100 lbs. dumbbells show just how powerful his arms were. His triceps strength was legendary. His favourite triceps routine was as follows:

On Sept. 27, 2002, Bertil’s death sentence was changed to life in prison for the murder of his ex-girlfriend and her mother.
This DVD is a tribute to the wonderful career of Brutal BERTIL FOX.

A review on Bertil Fox by Matt Canning.