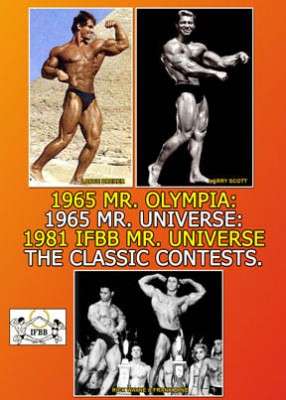 Here is some very rare footage of Classic Contests shot by one of our USA cameramen in the 60s.

You will see highlights from the following contests:
1965 Mr. Olympia won by Larry Scott
1965 IFBB Mr. Universe and Mr. America from the same year
1969 IFBB East Coast USA, and to fill out the hour running time, the
1981 IFBB Mr. Universe (Amateur World Championships) from Cairo, Egypt. This last segment of 10 mins is great quality as it was shot on video with live sound. The Overall Winner was Lance Dreher, USA.

Naturally these segments are all excerpts, and are mostly film to video transfers, with music added. Do not expect the quality to be HD, as these contests were shot under very difficult lighting situations using technology that was available at the time. The first 50 mins are average quality. However this video is a priceless record of a piece of history that otherwise would have been lost. We are not listing contest results as this is not a contest video in the way they are done today.