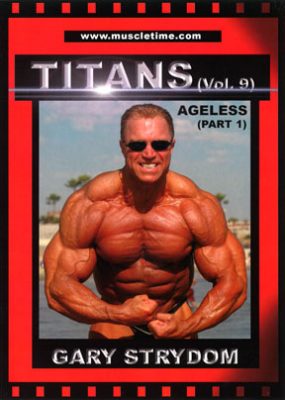 Gary Strydom backstage and behind the scenes at the Shawn Ray Classic!  Workouts taped in Gold’s Gym, Venice and on the famous Muscle Beach.

AGELESS GARY STRYDOM IS BACK!  (Please note. On the cover above it says PART 1.  However PART 2 was never produced.)

Gary is just as good today as he was in the 90’s, some might say even better.

A report from the producers:

Gary’s showdowns at the Olympia were few and far between as he had signed a contract with the WBF (for all you youngsters the WBF was a Bodybuilding federation founded by Vince McMahon from the WWF) and therefore could not compete in the Olympia as from 1991.

The footage on the Pro World II DVD is from FIBO 1991! Gary – months out from the first WBF show – was so ripped and contest ready that it is very hard to describe.

When we saw him pose in his room in Denver we were absolutely shocked! The man was super ripped all over. He did not have the fullness of FIBO 1991 but he was not that far off it. We knew right away that his comeback would be a great success. (Gary placed 7th in Denver Pro and could have been a bit higher in our opinion.) Fortunately we made a deal in Colorado to get together and do a DVD in L.A.

We had a great Saturday afternoon on Venice beach! First Gary trained at world famous Musclebeach and then took about an hour in the ocean for posing, then he posed with fans and tourists! No need to say that we got mindblowing footage that day!

After taping Gary for almost a week in Venice we must tell you that he is getting closer to the unreal muscle look he had in 1991. It felt like we were seeing his muscles grow an inch each day!