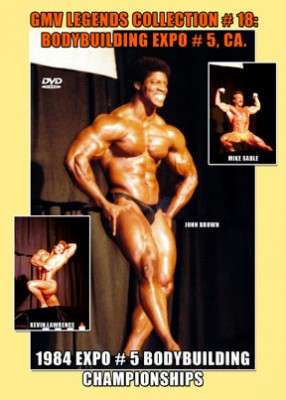 See a whole lineup of “Legends” at the famous Bodybuilding Expo # 5 in Los Angeles, CA in 1984.  Back for the fifth-time in LA, EXP0 # 5 is the event of the year that brings it all together, being the largest body building and strength spectacular in California.

The Expo took place at the Disneyland Hotel Convention Centre on July 21st and 22nd, 1984. The highlights included six of the World’s top professional bodybuilders posing on stage together in a mind bending display of muscle.  Mike Dayton (see our separate DVD) being shot before he hanged himself – also grabbed people’s attention in his incredible “anything goes” act. Do not try this stuff at home!

We produced a number of videos from this event, such as this EXPO # 5 BODYBUILDING DVD, THE JOHN BROWN & TIM BELKNAP SEMINAR, THE MIKE DAYTON STRENGTH SHOW, and taped the next day, THE KAY BAXTER DVD.

The EXPO # 5 BODYBUILDING SHOW DVD includes the full posing routines of all the top MEN AND WOMEN and their posedowns, as well as the posedowns in the two classes of the men’s competition and the full routines of the mixed pairs.

This is followed by fantastic guest posing performances by the following stars:

To top this off the guest posers closed the show with an all-together muscle extravaganza posedown which had the audience of 2000 standing and shouting for more.

This is a very exciting DVD, especially for lovers of American bodybuilding stars of the eighties.