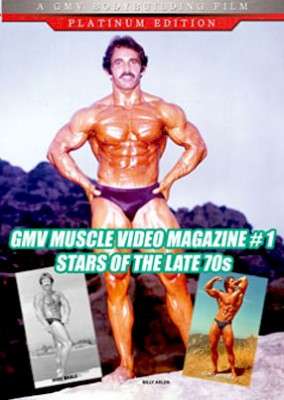 This 60 MINUTES ‘all-star’ video is somewhat like a previews video, as it contains so many famous champions. It has more stars than a Mr. Olympia line-up!

This 60 MINUTES “all-star” DVD is somewhat like a previews DVD, as it contains so many famous champions.  It has more stars than a Mr. Olympia line-up!

Although we have titled the DVD throughout listing major contests and solo stars, there simply isn’t space to list on-screen all the champions.  This product page gives you a complete ‘body by body’ word description of all that takes place, and lists all the physiques in order of appearance.  We suggest you keep a copy of this page with the DVD for future reference.

GMV Muscle Video Magazine #1 opens with a look at the light heavyweight line-up of the 1980 AAU Mr. America Show, held in the beautiful Santa Monica Civic Auditorium in California on September 6th. You will see Bob Jodkiewicz, Bronston Austin, and James Seitzer.

Next the fantastic heavy-weight posedown, said by some of the judges to rival the quality of a typical Mr. Universe contest.

This was one of the toughest and best heavyweight line-ups ever seen in a Mr. America contest.

The posedown features Kemper, Arlen, DeFerro, Leonard (the winner of the class) and Dreher.

Next the overall Mr. America posedown between the 4 class winners.  It was a narrow victory for GARY LEONARD over Bronston Austin, with the trophy presented by big Lou Ferrigno.   Leonard hits more victory poses for the cameras.

A full report of this fantastic contest appeared in Iron Man Magazine November 1980 Vol. 40 #1. A number of these top men went on to become our present day professional champions.

Next we present the 1980 Mr. Surf Festival contest at Venice Beach. You see a lively posedown plus solo posing by the winner Jim Tarleton, in the Californian sunshine on September 1st, 1980.

Our DVD now moves to a preview of Mike Sable pumping up, prior to his outdoors solo video feature. Then there is a similar outdoor preview of Masters Over 40 champ Don Knipp, pumping with cables on the Santa Monica beach.

Wayne’s camera now moves to Singapore in 1983 for the IFBB World Championships, where he filmed big blond Frank Gay of Switzerland, posing and pumping at pool side, shot on video.  Other solo features were also filmed this same day with Chuck Williams and Charles Glass.

Our video next takes us back to 1977 and the old Gold’s Gym in Santa Monica, with then owner Ken Sprague posing in front of the gym with his top physiques for the TV news camera.  We caught this rare moment on video, with all the big boys, which included: Manuel Perry, Bill Grant, Kent Kuehn, Larry Gordon, Larry Jackson, and present joint owner of Golds, Pete Grymkowski. See a group photo (bottom of page below) in front of Gold’s Gym in 1979.

Finally to the on-stage action at the 1977 Mr. America Show at the final presentations. This was later in the  day, after the parade and prejudging.  Over 100 of the nation’s top bodybuilders competed for the major awards. You will see in the posedown line-ups Tom Platz, C.F. Smith, Ron Teufel, Dave Johns, Doug Beaver, Manuel Perry, Clint Beyerle and Pete Grymkowski.

Legendary film goddess MAE WEST presents the overall Mr. America trophy to a jubilant DAVE JOHNS who hits poses for his fans.  He also took the most muscular award and went on to win the overall title at the 1978 NABBA Amateur Mr. Universe in London.

You may spot a very young Andreas Cahling in the background of this last scene. Johns, Perry and Teufel were the three class winners in this all time classic contest video, and none of this footage has been released by us before.  We believe this was Mae West’s last public appearance.  She was the star of the film “Sextette”.

A sad note. I asked Bronston Austin and Dave Johns to shoot solo posing features with me. They both politely declined saying that they would shoot and make their own posing films later. I am sorry to say that it never happened and it was an opportunity lost for bodybuilding history.

All footage was recorded on silent super 8 film, transferred to video, then digitally remastered to DVD, with music added. This is a star-studded collection of the finest in body building presentations from 1977 and 1980 from our library of physique classics. Plus a highlight from 1983.

In 1976 The Weiders merged with some big promoters to form AFAB. By 1980, AFAB became the NPC under Jim Manion. There is some slight confusion by me re exactly what banner some of these old contests were held under. Especially where I have no program from the event.

* FINAL NOTE: This is probably the greatest collection of physique stars I have ever presented on a single DVD.  Wayne Gallasch