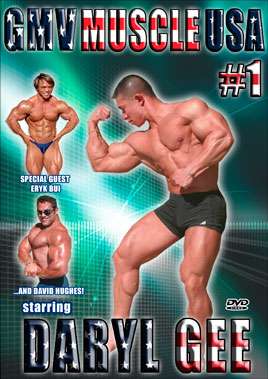 See him posing poolside for our two cameras at the 2003 and 2004 Olympia Weekends in Las Vegas.

After Daryl oils up with the help of 2004 NPC Middleweight Champion Eryk Bui, they do a duo posedown followed by more close-up footage of Daryl from our second camera.

See his fantastic huge biceps fill the screen in some great close-ups.

This is another “must have” feature from GMV Productions. We predict it will not be long before Daryl also joins ERYK BUI as a fellow professional.

SPECIAL THANKS to Richard Rossan who discovered these 3 models and made this DVD possible.
Photographers: Richard Rossan, Wayne & Tina Gallasch, Clive Jaques.