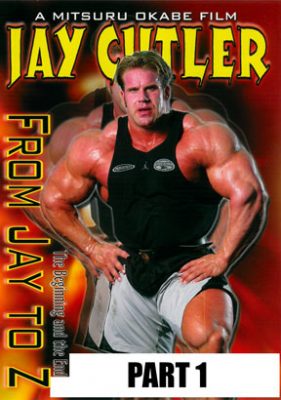 Part 1 is mostly Lifestyle, plus a lengthy seminar; an intimate look into Jay’s life in Las Vegas.

2007 Fitexpo – working on the Muscletech booth – meeting fans
Long seminar section at Fitexpo
Home life
Travelling with partner
Visits tanning studio
2007 Arnold classic – hanging out with Darrem Charles
Meeting fans and many famous bodybuilders at the expo such as Dorian Yates and Kevin Levrone
Talks to Phil Heath after he has competed.
Speaks to Flex Wheeler and other bodybuilders

“See Jay Cutler’s Life Style, Training & Everything in Between!”

Everything is included in this DVD! According to Jay, “This is not only the most intense full-fledged DVD that I have ever filmed or produced in my career, but I have been told by Mitsuru Okabe (executive director/producer) that it is unlike ANYTHING ever filmed. We are saving much of the surprise for the official release, but BELIEVE ME, if you’ve ever witness my past DVD installments and gotten information and motivation from them – then THIS DVD will surely change your life, because it is always about the fans.”

This DVD will include NEVER before seen in-depth footage from around the World, literally! Including the amazing Arnold Classic this year where Martinez dethroned the former winner, TRAINING IN VENICE ON MUSCLE BEACH (a first for any Mr. Olympia in decades!) The 2007 Iron Man weekend, and even an entire scene at IN-AND-OUT BURGER! (Even Mr. O needs to cheat once a year, haha!!)

GUEST APPEARANCES: Everyone is in this DVD, and they bring a lot to the excitement of the filming. Good friend Phil ‘The Gift’ Heath, Victor Martinez, Dave Bourlet (owner of the Jay Cutler’s Max Muscle).

Okay, I admit that when I received my review copy of this DVD and saw that it was almost seven hours long, I said to myself, “There’s no way I’m watching this entire thing. If I’m going to spend seven hours in front of my TV, it’ll be for ‘Seinfeld’ reruns or ‘The Matrix’ trilogy.” Well, guess what? I did watch the whole thing—and I really enjoyed it.

It would take many pages for me to tell you all about “From Jay to Z,” as it’s truly packed with entertaining and interesting footage of the world’s greatest bodybuilder. That’s quite unlike most other bodybuilding DVDs. It follows Jay through almost all facets of his life and work.  While the Training pieces are enjoyable to watch, the footage outside the gym is the most engaging.  The viewer gets to see Jay meet and greet fans, work at the Muscle Tech booth, hold a seminar at the Iron Man Pro, talk to other fitness celebrities  (and there are many on this DVD)  attend the grand opening of his Max Muscle store in Venice, California, and   much more.

This DVD truly “humanizes” Jay and shows exactly what it takes to be Mr. Olympia both inside and outside the gym. In fact, after watching Jay in action, I’ve come to respect him even more as both a bodybuilder and a representative of the sport. He’s remained humble, level-headed, passionate and, most important, approachable and friendly to all of his fans, no matter what the situation. I highly recommend the DVD and applaud Jay for being such a fine ambassador of Bodybuilding.

Click here for a DVD Review by Steve Buccilli.