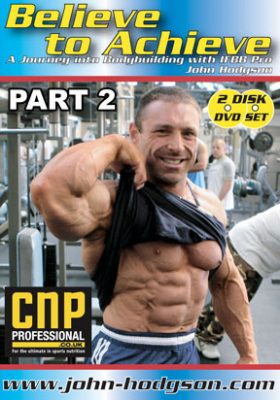 A journey into the world of bodybuilding with British IFBB Pro – John Hodgson’.  Part 2 takes you right into his world, and his workout.

“A journey into the world of bodybuilding with British IFBB Pro – John Hodgson”.

DVD shot and produced by Eric Guy for John Hodgson.

A review of this DVD.

Training photos of John Hodgson taken the day after the 2007 IFBB Aussie GP.

John Hodgson, “Mr Condition” to his fellow Competitors, is renowned for bringing a granite like physique to the competitive stage. He gives new meaning to the word “condition”.

With three EFBB British titles and an IFBB Pro card to his name, John has demonstrated that he knows better than most how to step on stage, ripped, rock hard and muscular.

John has competed as an underdog on the Pro circuit, however, this has never prevented him from giving 110% effort to his preparation. His meticulous approach has had bodybuilding observers label him the “Machine”.

With the Arnold and Olympia set firmly in his sights, you can guarantee “Mr Condition” will make his competitive dreams come true…..

“You have to BELIEVE to ACHIEVE”.