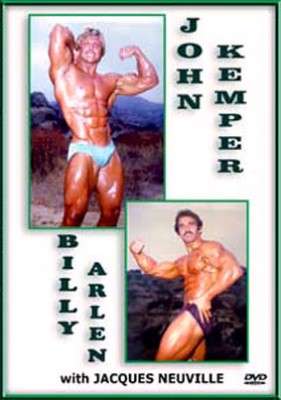 Two heavyweight bodybuilders in rock-hard condition, the morning after they competed in the 1980 Mr. America contest.

Filmed at the spectacular Vasquez Rocks, located in the high desert near Agua Dulce Springs, CA, our two heavyweight bodybuilders were in rock-hard condition. This was on the morning after they competed in the 1980 Mr. America contest.

Here in the rocky foothills of Southern California the first sequence features each man in a tight t-shirt, sleeves rolled up to display arms in a dramatic style!! These same arms are worked to a full-vein-bulging pump and intense contraction posing. Muscular arms in full-screen closeup.

Next John & Billy go head to head in tough duo muscle action, as they pump together with emphasis on massive arms. The session becomes an intense competitive posedown. (The total Kemper Arlen segment runs for 43 mins.)

BILLY ARLEN heats up the posing with pose after pose showing mass and definition in a truly macho muscle display. For the record, Billy is 5’10“ (176 cm) 210 lb (95 kg) with a massive 52” chest, 30” waist and 19” arms. He’s a former American football star. Astounding closeups of ripped pecs, rock hard abs, cuts and striations, topped by bulging veins.

JACQUES NEUVILLE
To finish off the DVD, there’s a dynamic sequence of the French bodybuilding star JACQUES NEUVILLE. Filmed right at the start of his career when he was only 23 years old. His symmetry is flawless – a truly rare piece of archival footage. (12 mins).

All photos for this DVD presentation by Wayne Gallasch, copyright GMV.

From his first title as Teenage Mr. New Jersey, John enjoyed an outstanding career culminating in winning the 1981 Masters Games Heavyweight, Heavyweight and Overall titles at the 1983 NPC Junior USAs and the 1987 Masters Nationals.