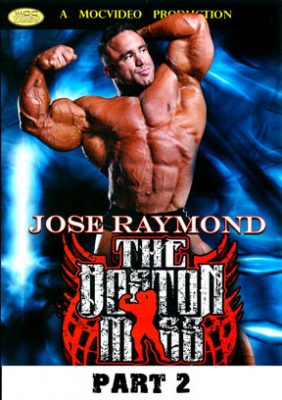 Part 2 includes lots of workout, including back, chest and shoulders.  He visits guru Steve Cardillo and much much more. At 5′ 3″ nobody compares to his density and granite-like conditioning.

Visits ANC Nutrition Center and talks to trainer/guru Steve Cardillo
Trains with Steve Cardillo and Indian Colts (NFL) Linebacker Shawn Loiseau at ‘The Cardillo Compound’. Workout is with water buckets and weights on wheels.
Back workout with Ron Harris.
Visits parent’s at the family home.
Shoulder and chest workout with his brother Tito Raymond.
Outdoor posing and career + bodybuilding lifestyle discussion.
Has a meal with Tito.