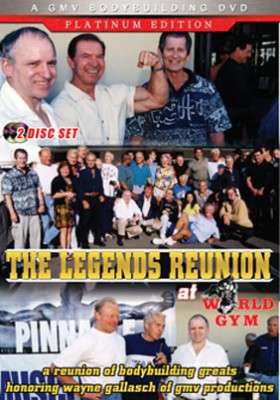 This wonderful event was held at the World Gym Corporate Headquarters, Marina del Rey, California on October 25th, 2000. Legendary Gene Mozée was the compere as he introduced some of the great legends of the Iron Game,  such as LARRY SCOTT, LOU FERRIGNO, DAVE DRAPER, TOM PLATZ, MICKEY HARGITAY and many more.

This wonderful event was held at the World Gym Corporate Headquarters, Marina del Rey, California on October 25th, 2000. Legendary Gene Mozée was the MC as he introduced some of the great legends of the Iron Game.  This was a rare celebration and opportunity for Bill Comstock to gather together Wayne’s friends and associates in celebration of the legends and immortals of bodybuilding, thanks also to the kindness of Joe Gold.

Champions such as LARRY SCOTT, LOU FERRIGNO, DAVE DRAPER, TOM PLATZ, MICKEY HARGITAY, ED FURY, BOB PARIS, ZABO, JOE GOLD, ROBBY ROBINSON, BRAD HARRIS, ERNIE SANTIAGO, CLINT BEYERLE and AL BECKLES – attended, to name just a few. Every attendee is listed in the DVD and many are interviewed by Wayne or Gene.  Wayne has been a pioneer of bodybuilding films and videos from his first stills in the mid 1960s to the present day.

Disc #1 is the complete Reunion video on DVD. Reunion running time: 70 minutes plus extra scene 15 minutes. EXTRAS:
Includes a wonderful interview with MICKEY HARGITAY, 15 minutes. (This extra scene was shot with Mickey Hargitay at his home in West Hollywood, in the Hollywood Hills. Shot on the morning prior to the Legends Reunion with interviewer Clive Jaques.)

We include our complete and extensive collection of REUNION PHOTOS taken by Jerry Fredrick, Clive Jaques and Wayne Gallasch. As far as we can tell, every single attendee is included at least once in the photos!

Many thanks to the event sponsors, who were:
World Gym
Iron Man Magazine
Ivanko Barbell Co. Tom Lincir
Met-Rx

Part of the crowd who attended. Photo by Clive Jaques. Special thanks also to Jerry Fredrick who took many photos for me.

The Photo Gallery in the DVD includes photos showing every single person who attended with photos by Fredrick and Jaques.
Also my thanks to JOE GOLD for allowing me to hold my reunion at his WORLD GYM. See Joe right of center, blue World Gym T-shirt.

Read Wayne’s Hard News Reunion Report from this event which includes a complete list of attendees and links to the various DVDs they appear in.

*On Sept. 3, 2007 there was a ceremony at Muscle Beach to create a “Walk of Fame” for Body Builders.  They gave Mickey Hargitay a Tribute on Labour Day with a plaque on the “new” Walk of Fame”. They will also honour Jack LaLanne with a Lifetime Achievement Award.