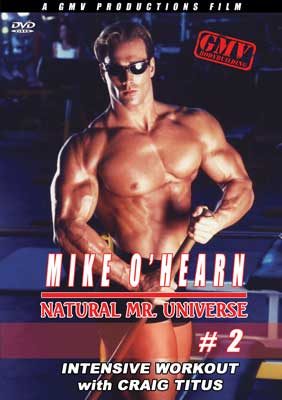 Mike and Donnie O’Hearn go set for set blasting arms with IFBB Pro and bad boy of bodybuilding Craig Titus. Witness the motivation and intensity present in the gym.

Witness the motivation and intensity present in the gym. With both free weights and machines used extensively, this feature is exciting and educational viewing. Mike’s life of training comes under review and he tells how he became the world’s best natural physique champion. One secret is that he stays huge from power lifting. He also started training at a very early age and this gave him a huge start! Includes footage of Mike’s victory at the Natural Mr. Universe competition.

Producer’s Note:
Mike O’Hearn had this workout filmed in LA and then sent us the camera tapes so that we could edit and produce this video, now available on DVD. This was shot several years ago with older technology and the DVD looks exactly as good as the original camera tapes.  The DVD is most enjoyable and a unique record of guys who had little publicity on video at the time.