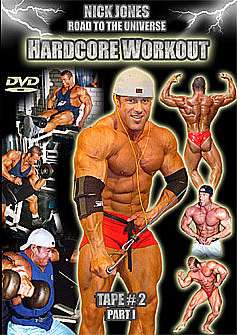 Nick Jones’ full gym workout – no holds barred!! 150 hardcore, gut-busting minutes. He screams, grunts, groans and sweats – anything to lift those weights heavier, and to work out harder.

Nick Jones – Road to the Universe # 2

With Australia’s #1 Amateur Bodybuilder!!  This is DVD #2 in our series on Nick – ROAD TO THE UNIVERSE.

We followed Nick with our 2 cameras through each of his separate hardcore workouts. Nothing was staged for us as you see the actual weights and reps as used by Nick in the count-down to the Mr. Universe.

This is a unique fly-on-the-wall doco on what it is like at the top level of bodybuilding. He screams, grunts, groans and sweats – anything to lift those weights heavier, and to work out harder. He trains every body part to failure and beyond. When he gets his breath back, he talks after many of the exercises, spilling the beans on his secrets for success. This is one focussed and dedicated guy!!

We travel to the NABBA Universe in the UK to follow Nick back stage, and show all his rounds (including posing routine) on stage during the event. We see him pumping and posing poolside in Las Vegas over the Olympia weekend, and guest posing in Australia.

Shot over a 12 month period!! This is the most extensive and comprehensive workout DVD ever produced by GMV.

From Down Under – Nick Jones of Australia wins the 2006 Musclemania Worlds.

He came to Hollywood as a virtual unknown to most established Musclemania competitors.  And, even at the Weigh-In’s, nobody really gave much notice to the Aussie middleweight.  Sure, you could see he had good shape and nice muscle bellies, but it wasn’t until you saw him on stage next to the other competitors that Nick Jones came to life and captured the judges attention.  The 32 year old Gen-Tec nutrition company manufacturer had just won the Musclemania Australia four weeks earlier.  But, Nick has been competing for over 10 years throughout Australia and internationally, so he knows how to condition his physique while maintaining good muscle volume and classic symmetry.

And, it was muscle definition that won Nick the overall title at Musclemania World in a razor thin, double round vote among the other weight classes beating out BW Tony Montalbano (Britain), LW Roderick Ternida (Philippines), LHW Bobby Wagner (USA) and HW Rob Terry (Britain).  Unfortunately, some favorites went home disappointed including ’06 MM Britain Andrew “Mezza” Merrifield who went home quite angry saying he should have won his class and New England star Roger Morello who may not have made the Top 5 cut but grabbed two sports modeling jobs out of his appearance at Model America.  All announced and current results are official following the posted urinalysis test reports.