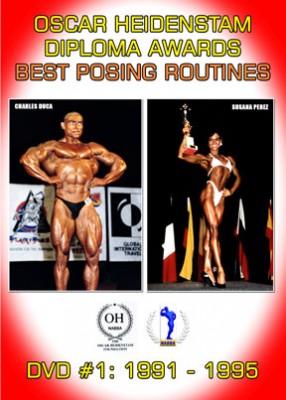 These awards are for the most outstanding choreography and artistry in bodybuilding posing. Covering the years 1991 – 1995.
Wayne Gallasch of GMV Productions shot the routines at the prestigious NABBA Mr & Miss Universe contests, with kind permission of NABBA.

For those who don’t already know, Oscar Heidenstam ran NABBA for nearly 50 years, until his death in 1991.  Malcolm Whyatt set up the OH Foundation, just after Oscar’s death, to honour great bodybuilders, both past and present.

In 1991, The Oscar Heidenstam Foundation inaugurated a “Best Posing Award” for men and women at the NABBA Universe.

These awards reflect Oscar Heidenstam’s own achievements and consummate enthusiasm for displaying physical excellence.
Only two diploma awards are given each year, one each for best male and best female posing routine.
All competitors are scrutinised by three OHF judges for these OHF awards.

A competitor doesn’t necessarily have to possess the best physique but is judged within the OHF criteria:- overall appearance, stage charisma, poise, grace, unique style, and artistic choreography complimented by suitable music.

This 35 minute DVD of the world’s most incredible posing routines will serve as a guide and inspiration to all competitors and lovers of physique presentation at the highest level.

Sit back and enjoy this unique DVD of the best posing routines in the world!

In 2010 Malcolm resumed his Best Presentation Awards at the NABBA Universe.

The winners were as follows, ending with the 2014 Awards.

THERE IS NO SPECIAL VIDEO OF THESE AWARDS AT THIS TIME.