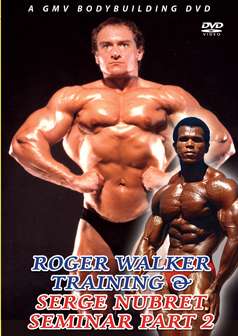 Serge Nubret posing on the beach in Sydney, and in the studio – audio seminar in Adelaide. The second part of the DVD is a special feature starring Australia’s Mr Universe winner, ROGER WALKER.

Serge Nubret was known as the Black Prince of Paris. He was Mr Europe, Mr World, Mr Universe and 2nd to Arnold in the 1975 Mr Olympia. (In the Olympia he placed second twice and third twice.) Truly one of the all-time legends of bodybuilding.

The video opens with Serge posing on the beach in Sydney, Australia and also in the studio. This segment was shot by the famous lensman Robert Nailon. Some awe-inspiring full body and close-up shots of him in pumping and posing action – at his peak.

The GMV recorded soundtrack to Nubret’s posing segment is the final part of the Nubret Seminar given in Adelaide, South Australia.

Serge’s Contest History is listed below.

The second part of the DVD is a special feature starring one of Australia’s greatest ever bodybuilders – Mr Universe winner, ROGER WALKER. Roger is well remembered for his fantastic 6th place finish behind Arnold in the 1980 Mr Olympia at the Sydney Opera House, as well as his third place finish in the heavyweight class of the 1979 Mr. Olympia.  Our footage was shot in the studio and gym, first in posing trunks – then oiling, pumping up and training in a tank-top. Roger’s great muscularity is particularly evident as he trains his chest, back and shoulders.

Roger is at his peak and weighs in at 225 lbs (102Kg) ripped with 20” arms and a 53” chest.  We added a photo below of Roger when he won the Mr. Southern Hemisphere contest in Melbourne, Australia in 1974 on the night that Arnold was guest poser.
(These photos by Wayne Gallasch were not shot at the filming sessions portrayed in the DVD.)

On March 22nd, 2015, Roger received a VIP Guest Award from Graeme Lancefield on behalf of NABBA/WFF Australia for his outstanding record and his services to Australian bodybuilding.