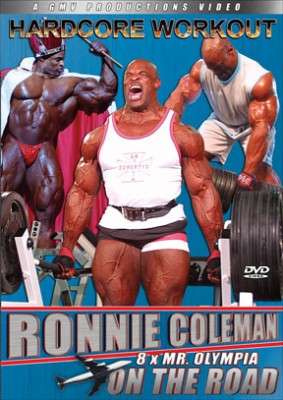 See Ronnie’s full HARDCORE WORKOUT and POSING when on the road! Shot in Australia over 3 days in October 2005 with 3 cameras, just 5 days after his historic 8th Olympia victory. Ronnie is hard and ripped – you’ve never seen him like this for a full body workout shoot.

See Ronnie’s full HARDCORE WORKOUT and POSING when on the road!

Shot in Australia over 3 days in October 2005 with 3 cameras, just 5 days after his historic 8th Olympia victory. Ronnie is hard and ripped.  You’ve never seen him like this for a full body workout shoot. Between sets, Ronnie explains how and why he does each exercise – Mr. Olympia reveals his secrets.

After an opening segment showing a number of short highlights from the DVD, Ronnie gets down to some serious BACK TRAINING. Our super bodybuilding Guru, Tony Doherty chats with Ronnie throughout most of the DVD.  He gleans many secrets and tips for his fans. Ronnie then POSES HIS BACK! Plus MORE POSING in the gym.

Next it is onto BICEPS training with various exercises followed by more mind bending POSING OF MIGHTY ARMS!

You will see Ronnie’s favourite “ABS” exercises while on the road and also hear Ronnie’s thoughts on nutrition and diet. In particular learn about Ronnie’s 6 meals per day and what he eats.

The incredible GUEST POSING ROUTINE Ronnie performed at the Victorian Championships is seen next.  His Mr Olympia condition simply amazes his many fans down-under. This is the first time his 2005 Olympia routine has been seen on DVD, as the Olympia DVD has not been released at the time of this release.

It is back in the gym for training SHOULDERS followed by MORE POSING of shoulders and arms. The mind bending TRAPS training which is shown on the main cover photo came next, followed by more upper body poses.

CHEST TRAINING is next with a little surprise in the training shirt department! Naturally there is more CHEST POSING for the cameras and the few lucky fans in the gym who saw us shoot the DVD.

The scene shifts to The Fitness Warehouse Megastore in Adelaide and RONNIE POSES at the SEMINAR for the packed audience. From the seminar we took Ronnie straight to the gym for his LEGS TRAINING. Witness some unbelievable sets on the leg curl machine.  The hamstrings show the most incredible separation I have ever seen.

PHOTO GALLERY FROM THE MAKING OF THIS DVD.

This is followed by POSING and FLEXING of LEGS before the DVD moves on to the GUEST POSING ENCORE which took place at the Victorian Championships in Melbourne.
Our sincere thanks to Ronnie who really busted himself.  He almost sweated blood to show you how hard and heavy he trains when ON THE ROAD.

This was without a doubt the greatest and most important shoot I have ever done in my 39 years of recording the best bodybuilders and major contests in the world.

We are often asked what music we used during the introduction of this DVD. The music is from a royalty free series of music CDs called ‘Music to Hues’.  There are dozens of discs in their highly recommended collection.  www.music2hues.com

A detailed review of this DVD.
Customer feedback for this DVD.
Ronnie’s stats and competitive history.