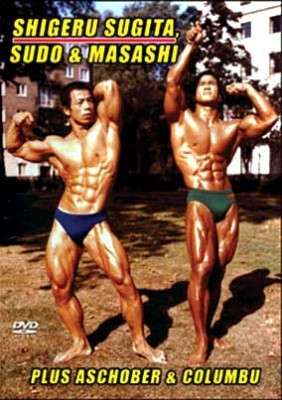 The sensational Japanese trio that took the London NABBA Mr. Universe by storm in 1976 captured on film as they oil each other, pump up and pose. Plus Klaus Aschober and Franco Columbu.

The sensational Japanese trio that took the London NABBA Mr. Universe by storm in 1976 captured on film as they oil each other, pump up and pose. Three champions solo and group posing in the classy atmosphere of London’s Hyde Park Square, filmed on the very day of the 1976 Mr. Universe. This unique occasion and superb posing display will never be duplicated. The shoot actually stopped traffic with people lined up along the fences of the private square, watching this photography take place. It was incredible.

SHIGERU SUGITA, a Mr. Japan, won the overall 1976 Mr. Universe title. The superstar of the session. Pictured on the left above.

KOZO SUDO, 1975 Mr. Japan, won the medium height class, and placed second to Sugita for the overall title. Pictured on the right above.

KLAUS ASCHOBER – 1975 Mr. Germany works out in the gym. Then outdoor oiling, pumping and posing. In this film, Klaus is featured in an intense gym workout as he works various muscle groups, and flexes to a full pump after each set. His favourite arm exercise was hammer curls on the incline bench. Klaus is in top contest condition, hard and shredded. This German segment took place thanks to the help of Wilfried Dubbels.  The posing segment was shot on the edge of a forest near the outskirts of Munich on September 15th, 1975. Klaus is pictured top left rear cover above. (approx 21 mins).

All segments were shot on film, transferred to video, then digitally remastered to DVD with music added. This is our first ever feature showcasing Asian bodybuilding champions.
Photos by Wayne Gallasch, copyright Wayne & GMV Productions.