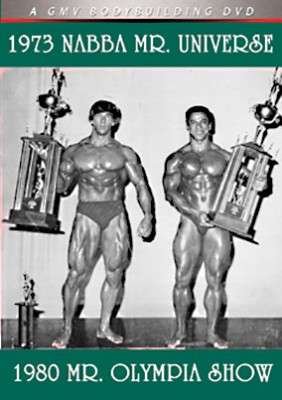 This is the big one, the oldest, most widely respected Mr. Universe Contest, then in its 25th year in 1973. CHRIS DICKERSON and BOYER COE were the Amateur and Professional winners. You will see posing, line-ups, awards – all the highlights!

See BOYER COE and CHRIS DICKERSON at their all time peak as they make it an overall Universe double victory for USA! What was even more remarkable this year, the following men from this contest went on to be future Mr. Universe winners: BILL RICHARDSON, ROGELIO MONTENEGRO, IMLACH SHEARER, IAN LAWRENCE and TONY EMMOTT. By coincidence, Emmott and Duval both went on to compete in the 1980 Mr. Olympia, as did Chris Dickerson, Boyer Coe and Dennis Tinerino!

A fully illustrated in depth report of this contest was carried in Iron Man Magazine (Vol. 33 No.2). See full results below.

BILL PEARL introduces all the Mr. Olympia competitors as they line up on stage. See ARNOLD and MIKE MENTZER in their last contest appearance, plus comparisons between the top men and Arnold posing with his first place trophy.  Also includes world champion power lifter and 1991 2nd place Ms. Olympia bodybuilder BEV FRANCIS making her FIRST EVER guest posing appearance.  This is the first known footage of Bev (during which she also demonstrates her amazing strength by squatting approximately 450lbs) and it is all exclusive to GMV.

Next you will see posing by BILLY KNIGHT, the three times Mr. Australia champion. Concludes with the special farewell posing appearance of the one and only REG PARK – Mr. Universe. This is a tape of legends and will become a collector’s item.

See below for the complete 1980 Mr. Olympia results.

*** This classic DVD was shot on silent film and transferred to full colour video and then to DVD with background music added.