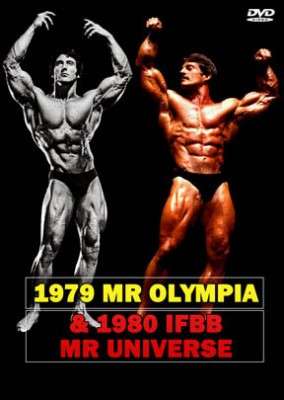 These 2 classic contests were shot on silent film and transferred to DVD with background music added.

This is rare film footage from the 1979 Mr. Olympia! You’ll see Mike Mentzer, Frank Zane, Al Beckles, Boyer Coe, Roger Walker, Chris Dickerson, Ed Corney, Robby Robinson and many more.  It is a little known fact that MIKE MENTZER won the Heavyweight Class, yet he never ever claimed the title of being a Mr Olympia – class winner. Class winners Zane and Mentzer are pictured front cover above.

This is Version #1 from the 1979 Mr. Olympia and runs 45 mins. We released a totally different, higher quality version shot by Joel Fletcher shortly. Joel’s footage from the 1979 Olympia only runs for 20 mins but there are other unseen Olympia years included with it. See Mr. Olympia The Golden Years.  Details in sidebar.

In the 1980 IFBB Mr. Universe held in Manila in the Philippines, see John Terilli, Hubert Metz, Jorma Raty, Gary Leonard, Richard Baldwin and many other champions. The DVD also shows some team posing and extremely brutal posedown action, plus presentations to some of the heavier classes.

This is the first known film record which features the fantastic arm display of class winner Jorma Raty of Finland. This 1980 segment runs for 15 mins.
These 2 classic contests were shot on silent film and transferred to DVD with background music added.