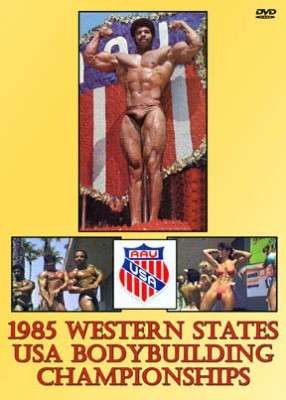 Famous Muscle Beach was the location for this well known annual event. See up and coming young physique champions from around the Western U.S.A. as they gathered to battle for top honours.

This famous contest was held out doors at Muscle Beach, California. Muscles in the sun!

Famous Muscle Beach is the location for this well known annual event. See up and coming young physique champions from around the Western U.S.A. as they gather to battle for top honours.  Each July 4th, the WESTERN STATES CHAMPIONSHIPS is held outdoors, in the glorious sunshine of Venice Beach, California.  The contest is promoted by Bill Howard, an old Muscle Beach star himself.

Watching this show is a thrill.  You can feel the enthusiasm and drive of these young bodybuilders as they pit their wares against one another.  This video features many stars to be, and should be an inspiration to all young body builders who can’t identify with the Mr. Olympia physiques of the day.  Both male and female contestants are featured, and the contest is outstanding for its large number of truly athletic, fit and muscular women.

The men are very muscular and in top contest shape, the women are lean and hard, yet surprisingly shapely, and each is prepared to give their all….which they do.  The show begins with a full line-up of male and female competitors, then shifts to individual posing.  You see everyone’s full posing routine.  It will also surprise you to see how first-rate the posing of these non-professional’s really is.  From full stage views to full body to awesome close-ups, every exciting move is captured on video tape.  You’ll see it all…judging line-ups, heated posedowns, trophy presentations, and even some candid shots of the contestants off stage.  Then as a special treat, a contestant puts on a full “break dancing” posing routine.  It was almost like seeing a muscular Michael Jackson performing.  The audience went wild.

You will totally enjoy this outdoor presentation of physique competition in sunny California in the mid eighties.  This video features not only crisp, sharp videography, but also colours are brought out to their fullest in the sunlight.

The overall winner of this AAU event was Bob Schry.   He also won 1982 Mr. Muscle Beach, as well as 1981 and 1983 Mr. Southern California. We have no solo victory photo of Schry.